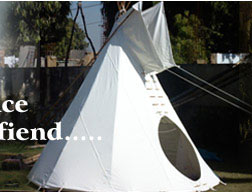 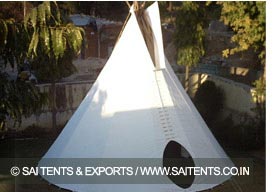 Tipi Tents were originally the tall tent dwellings with having buffalo skins fitted over wooden poles that were slanting toward central point and then tied together near the top. These had a flap at top to allow smoke to escape with a bottom flap that serve as doorway. As tall, cone-shaped and family-sized tents, these were made using animal skins (mostly of buffalo) that were sewn together and wrapped around poles. The present day construction of these tents also comprises space for smoke to disperse fire and allows air circulation with dew cloth for absorbing humidity and preventing drafts. Further, the improved construction techniques also help in increasing service life of tipi tent and at same time also easing its erection.

© Sai Tents & Exports. All Rights Reserved (Terms of Use)
Developed and Managed by IndiaMART InterMESH Limited